I’ve personally never seen meteorites slam into the surface of the moon with a force that drastically changes its topography. Yet without a telescope I can gaze into the night sky to see the resulting landscape of large and small impacts on the moon’s surface. Like observing changes to the moon’s surface, at CloudFactory we are observing changes in those we work with and in the communities around us. When impact occurs it is undeniable.

We believe that everyone is poor.

CloudFactory is an equal impact opportunity employer. We believe that everyone is poor. That’s a shocking way to view the world, as numerous research publications point to data showing the decline of poverty in the world. Nevertheless, if you were to overhear conversations about impact at our offices, you will hear us describe how poverty is about broken relationships.

We love stories of the impact that happens as people begin to work with us. Often those stories begin with a main character that is seemingly at a dead end, and we love it when that character is packed with potential to change their world. The symptoms of our poverty vary, but the remedy is restoring what has been lost or broken along the way.

Addressing poverty starts with the individual. It then spreads within our organization and into the communities where we live and work. We focus on developing ourselves into leaders that the world is looking for. Leaders that will solve the problems keeping talent and potential locked up in developing nations. We emphasize the importance of being competent in our work. We emphasize the role that character plays in our ability to lead others. We emphasize the responsibility that we bear to invest our time, talent, and treasure into our community.

We are focused on our people. And we are betting on the solutions to the poverty around us to come from within the boundaries of that nation. For us, that means Nepal and Kenya.

There are neighborhoods in Kathmandu and Nairobi where the light of the moon is the only illumination you may find. As the moon reflects light, our Cloudworkers magnify our resources for social impact when they are the ones to reflect that impact into their own communities. We provide ideas of how they can be leaders and challenge them to put it into action. Many of them respond to the opportunity and become a source of inspiration to their family and friends.

Our PeopleScale™ workforce model places employees in small teams where, in addition to working on projects that help us scale, they discuss weekly principles about life and community. Jyotshana’s story is an example of how this model connects people to work and impact: 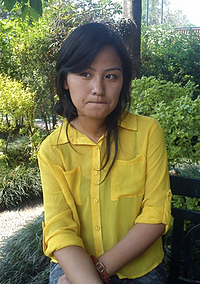 I have learned so much personally. The weekly principles are something we’ve learned since childhood but have at many times failed to put it into practice. Studying and discussing these principles have certainly helped me improve myself as a human being. I have developed my personality and have caused impact on those around me. As a team leader, I have also learned to work in a team – to work with four different people not always with the same state of mind and to lead them. I feel it has brought about a sense of responsibility in me. But this has only been a learning process.

I have learned that we have so much to offer to the world. Even if the efforts are small and negligible, the feeling of accomplishment and satisfaction that I have received while carrying out the community works we do from time to time is really something. I have personally learned to give back to the society and bring changes to the society though in smaller ways. All in all, I have developed as a person and learned to make differences in others’ lives as well.

At CloudFactory, we are not the typical business process outsourcing (BPO) company. We are not a not-for-profit organization. We are a group of people from varying backgrounds, beliefs and countries that are working towards a future where 1 million people will have called themselves Cloudworkers. Along with that title comes the conviction that anyone can be a light to their family and friends. Anyone can change and be a source of change. Everyone is poor and everyone has a part to play in making things right.