Rising Above the Debris 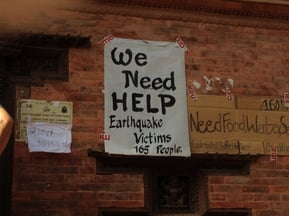 Saturday, April 25th, 11:56 AM NST, things got very rough. A magnitude 7.8 earthquake ripped through Nepal. The nation went into a state of panic and hyper vigilance that day, and stayed there for many weeks. I was no exception. 11:57 AM: when the shaking finally stopped I stepped out fearing the worst for my neighborhood. To my surprise, the damage was limited -- a few collapsed walls lay scattered on the ground, but most of the houses were still intact. Voices of men, women, and children began flooding the streets. Startled bodies were everywhere...frantically trying to call their loved ones.

Several minutes passed before coherence returned. Aftershocks, big and small, continued as an ugly reminder of what had just happened; each adding more tension to an already tense situation. I went around the block to survey the extent of the damage. Every familiar face I came across truly felt like a godsend. I couldn’t remain still any longer just ‘hoping’ for safety of others. Knowing how technology has aided in dire situations like these in the past, I created a Google Doc to check up on our internal staff. In the true spirit of CloudFactory, we crowdsourced the effort. A few people who had Internet, and whose situation allowed, marked themselves and those they knew of as safe. I cannot recall the number of times I refreshed that document that day. Every new name marked “safe” in the spreadsheet felt very dear. Progress, however, was slow; day turned into night, and the terror multiplied with the setting sun. Reports of damage inundated the airwaves, and rumours of the next big earthquake held rational minds hostage.

We lived among earthquakes that night. The next day, when Kabin, our HR manager, and I drove around the city to get to CloudFactory campus, the true scale of devastation unfolded. Several iconic temples, monuments, and high rises on which the imagery of the old and new city was built upon, were either no longer standing or severely damaged. Tents and tarpaulins grossly painted the city in bright blue, orange, and drab army green. When we finally arrived at CloudFactory, the leadership team along with few others were discussing emergency response plans. Our imperative was clear -- reach out to all members of the core staff, extend to 1500+ cloud workers, account for their safety, identify their humanitarian needs, and provide relief. It is no exaggeration to say that CloudFactory was among the first responders to its circle of families and friends.

Looking back, I don’t know why I felt necessary to do what I did that day. I am not particularly brave. I don’t have disaster recovery experience nor any training on it. None of that mattered however. It felt right -- to be among friends helping friends. My co-workers alongside me must have quietly felt something very similar as well. Minor tremors among some notable ones persisted throughout the day and into the night. None however could shake our collective resolve to see this disaster through. The following day, we tactically shifted our focus to coordinating a relief effort. We executed it in the same way we run our day-to-day business, in a lean, agile manner. This agility was immensely helpful in times of limited resources. We were able to tailor our relief packages instantly with feedback from our workers to make sure they received what they needed the most.

Shaken to the Core

A lot happened in those few days including Aditya, one of our cloudworkers, deciding to work on our platform just 6 hours after the first earthquake hit. By the following week, the number of our workers marked “safe” climbed to a full 100%, and our platform began buzzing to life again. Towards the end of the eventful week, early signs of recovery were popping up across the city -- more shops and businesses opened doors, traffic increased, and a sense of normality, albeit subdued, returned. For CloudFactory our work didn’t end there. The next chapter for us was rehabilitation and long-term recovery.

I do not want to be unfair to those for whom the physical, emotional, and mental toll of the earthquake is still a daily reality. I also do not want to under appreciate the character of the people - just people, nationally agnostic - that shone in the face of the disaster. I have the privilege to work alongside many such individuals at CloudFactory whose character radiated when Nepal went dark.

It was humbling to witness the same character displayed by our workers too; many of whom despite having their homes damaged, went that extra mile to help others who were in worse situation.

Raising up leaders in their own communities has always been at the core of CloudFactory and seeing these acts of workers serving their communities in times of disaster was a true testament of the values that CloudFactory has held.

Now, we are ramping up our community service projects to greater heights. We have set up a special fund to support projects promising of bigger impact in the communities. There are exciting times ahead, and I’m excited to be part of that journey.

Given how much is packed in a typical day at CloudFactory, fresh memories overshadow the ones long past. But also given the magnitude of the events that happened in April and May of 2015, they will undoubtedly live long in the psyche of the many involved. Memories get distorted over time, and events and narratives are shaped and reshaped to the comfort of the narrator. Be that as it may, despite the havoc caused by the 7.8 and its many accomplices, the lasting impression to come out of the chaos, debris and disaster following the major catastrophe is one of hope, resilience, and a will to move on.