Sentiment Analysis—and Why Computers Can't Do it Alone

Everyone has an opinion, but the same cannot be said for machines. With that in mind, how can we teach machines to understand people’s opinions and what they mean? And why does it matter? These are the questions we’ll tackle in today’s blog post on sentiment analysis, a subset of natural language processing (NLP).

What is sentiment analysis, and why does it matter?

Sentiment analysis, also known as opinion mining, is a technique for identifying and extracting subjective information from text and audio—for example, online reviews and customer support requests. In its simplest form, sentiment analysis determines whether subjective data is positive, negative, or neutral. But thanks to advances in machine learning, brands can now also use sentiment analysis for far more challenging use cases, such as identifying emotions, understanding less conventional language uses, and monitoring online behavior.

Sophisticated recommendation engines, such as those used by online stores like Amazon, rely on sentiment analysis to predict preferences. These highly sophisticated systems go far beyond using things like product ratings alone to learn how popular a particular product is and why.

Brands can also use sentiment analysis to prioritize customer support tickets, determine the most effective communication channels, and plan for product improvements. Together, these insights can lead to better customer experiences, new opportunities and, in turn, improved profitability.

Given the vast amount of readily available public information on social media, governments are also starting to implement sentiment analysis to achieve greater transparency, drive citizen engagement, and even figure out how people are responding to the ongoing fight against COVID-19. A view of sentiment allows governments and policymakers to identify widespread societal and epidemiological issues before they spiral out of control.

How does sentiment analysis work?

The modern approach to sentiment analysis relies on natural language processing, which establishes an interface between human language and computer science. This interface effectively enables machines to read text or listen to the audio for the purpose of understanding what is being said, letting machines go far beyond providing simple numerical insights, such as ratings.

NLP takes sentiment analysis to a whole new level by letting us see the actual meaning behind spoken and written content. Today’s machines can learn from data to the point where they can detect positive, negative, and neutral wording, allowing brands to build comprehensive emotional profiles. With an even more fine-grained approach, systems can even identify and process topics and sentiments at a sentence level, for instance, comparative expressions and references to specific products, features, and experiences.

There is a catch though. For that kind of advanced learning and analysis, vast amounts of accurately annotated, contextual training data must be fed into the model.

Why is sentiment analysis so difficult?

Sentiment analysis is one of the most challenging areas of artificial intelligence for the simple reason that machines lack emotions. Indeed, even we humans often struggle to interpret sentiment correctly, especially when it comes to vague wording, slang, and figures of speech.

Subjectivity is another challenge. Consider, for example, the word ‘nice.’ ‘Nice’ is clearly a positive word that, when applied to a particular product, demonstrates a positive sentiment. But it can also represent a sarcastic comment. Also, consider adjectives of size and color. For example, one might mention that a product is red because they really like that color, or because they’re stating a fact. To tell the difference, the machine needs to understand context and intention.

Context matters because people don’t always make explicit statements. And a machine can’t learn context unless something is explicitly stated. Consider the questions “What did you like about our product?” and “What didn’t you like about our product?” Depending on the question, the answers “nothing” and “everything” each completely changes the polarity of the sentiment.

Irony and sarcasm also present enormous challenges in sentiment analysis because machines aren’t exactly known for their great sense of humor. Yet if a machine fails to recognize when a person is using irony or sarcasm, its outputs can lead to embarrassing misinterpretations.

These are, by no means, the only challenges of developing sentiment analysis models. There is also a need to identify and understand comparative phrases, define a baseline for neutrality, recognize the use of emojis, and understand slang and neologisms.

All these challenges make clear the need for keeping humans in the loop (HITL) when building sentiment analysis models. After all, only humans experience sentiment, so only they can train a viable model.

What is the best way to approach sentiment analysis training?

To build a viable sentiment analysis algorithm, sentiment analysis model developers need a large amount of labeled data to train the model—they must also focus on context and quality assurance when choosing a data preparation team. As you’ll see in this Hivemind study, annotators paid by the hour are more likely to label and prepare data accurately, whereas crowdsourced teams and gig workers, who are normally paid by the task, tend to interpret sentiment incorrectly or default to ‘other’ to complete the task.

Managed workforces present the best of both worlds. On one hand, having access to a vetted team over which you have complete oversight ensures better quality assurance and alignment with your project goals. And on the other, as an outsourced model, a managed workforce provides a degree of scalability and flexibility that matches those you get from crowdsourcing or teaming up with gig workers.

It all comes down to selecting the right workforce—one that cares about your data, receives ongoing training, and understands your business goals. Data labeling is as much art as it is science. As such, consider teaming up with people who have deep knowledge of both the human and technical aspects of the work. Your models, and their predictions, depend on it.

Our natural language processing services help you scale text and audio annotation by teaming up with a managed workforce with the ability to understand and interpret complex and nuanced language. 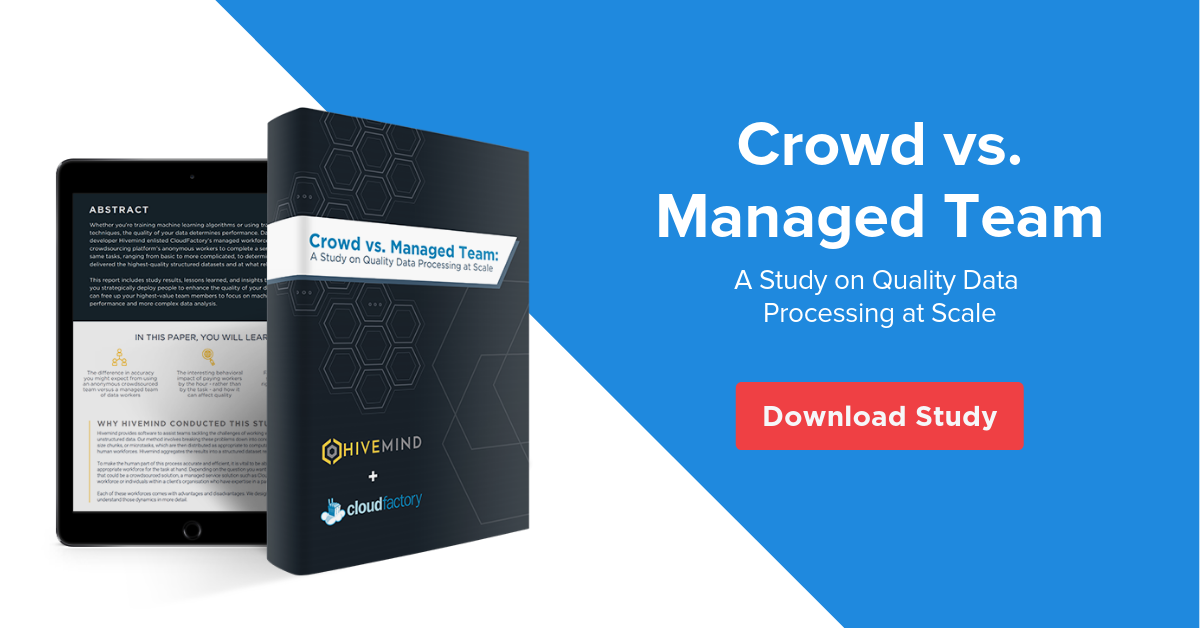